Story Preservation wishes to thank Morgan Blum Schneider the Director of Education at the Jewish Family and Children’s Services Holocaust Center in San Francisco for allowing us to use and share with Learning Lab partner schools the original lesson plan, which she developed, titled Surviving Hitler: A Love Story.  The lesson plan follows the story of Jutta and Helmuth Cords and their involvement with the plot to assassinate Hitler.  Jutta and Helmuth Cords daughter, Claudia Cords-Damon, shared her parents’ story with SPI.  As has been said on numerous occasions, the resulting recording “reads like a novel.”

Story Preservation wishes to thank playwright Tom Anastasi for allowing us to use and share with Learning Lab partner schools his script for the play Surviving Evil.  The play is a theatrical depiction of the life of holocaust survivor Stephan Lewy, whose oral history is part of Story Preservation’s collection.

What better way to teach young people about the holocaust than to have them listen to the stories of those who survived it and then, as we are now able to offer, have them take on the roles of victims, witnesses, and perpetrators.

“What they did, the Germans, they took the kids. We were about roughly fifty girls and fifty boys. They put us into the synagogue, and they couldn’t torch it, because we had Gentile people living on either side. So, above the arc, there is an eternal light burning in every synagogue, 24 hours a day, 7 days a week. Ours was a gas-fired light. It could be electric; it could be a large candle that burns for seven days, and so on. But ours was a gas-fired light. What they did, they cut the gas line to this eternal light and let the gas escape. We were all sitting in 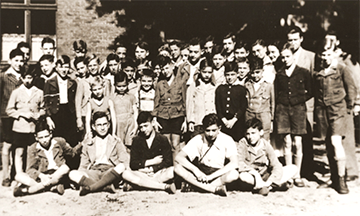 these seats —one hundred kids. They walked out, locked the doors on us, and walked away, hoping that we would suffocate in the process. So, fortunately, one of the boys, who probably was about fourteen years old, had enough sense to take a chair and break some windows, figuring he would be punished for breaking the window, but that’s what saved our lives that night. There were 279 synagogues that were either burned or demolished that night.”

This is a Learning Lab project and play well suited as a way to observe the anniversary of Kristallnacht, the Night of Broken Glass, which took place on November 9 and 10, 1938, and to observe Genocide Awareness Month, which in many states is observed during the month of April.