By Story Preservation Initiative on September 1, 2014

He has listened to and recorded bird songs from the East Coast to the West, and constantly adds to his birdsong library back home in Massachusetts, where he’s professor emeritus of biology at the University of Massachusetts.

His book The Singing Life of Birds: The Art and Science of Listening to Birdsong won the 2006 John Burroughs Medal “for outstanding natural history writing” and the American Birding Association’s Robert Ridgeway Award “for excellence in publications in field ornithology.”

Kroodsma explores the mysteries of birdsong — how birds learn to sing, why some sing and some don’t, and why songs vary from bird to bird and even from place to place. “Birds have song dialects just like we humans have dialects,” he says.

On his travels, Kroodsma enjoys listening, knowing that where a bird learned a song is just as important as a bird’s genealogy. He noticed in his travels that birds of the same species but in different states sang the same song, but with their own unique “accents.”

His field of study may be unique, but the way he goes about his research is equally unique — Kroodsma tours the continent on his bicycle, collecting bird songs along the way. He biked completely across the nation once in 2003, and in 2004 biked from the Atlantic shore to the Mississippi, lugging his recording equipment with him.

“There is no better way to hear a continent sing than by bicycle,” Kroodsma says. “You can read the minds of these birds if you simply listen… Riding a bike is just a great way to hear birds.” 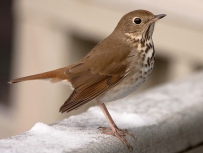 Don’s new book tentatively titled “Listening to a Continent Sing.  Birdsong by Bicycle from the Atlantic to the Pacific,” is soon to be released from Princeton University Press.

To Listen to Don’s recording, click on links below.