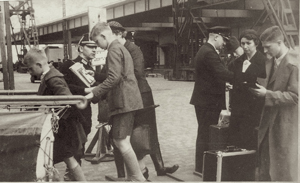 Max Ebel was born in Speyer, Germany in 1919.  As a young man Max refused to join the Hitler Youth.  Because of that, life in Speyer became very dangerous for Max, and ultimately led him to immigrate to the United States in 1937. Max settled in Boston. He was 17 years old.

Four years later, on December 7, 1941, when the Japanese bombed Pearl Harbor, life changed drastically for Max.  President Roosevelt issued Presidential proclamations pursuant to the Alien Enemies Act declaring all Japanese, German, and Italian aliens to be “enemy aliens” and placing them under the jurisdiction of the Department of Justice. Along with over 1,000,000 resident aliens, Max had to register, be fingerprinted, and carry a picture ID. No enemy aliens were allowed to have radios, cameras, firearms and their travel was severely restricted. Max’s citizenship plans stopped and he registered with the Selective Service. When asked if he would fight for the US in Germany, he said, “no,” adding that he was willing to fight in the Pacific.   He stated that he did not want to fight against his cousins, brother and friends in the land of his birth.

On September 28, 1942 Max, then 23, was picked up from work for questioning. He didn’t return home for another two and one-half years.

Max was first sent to the Boston immigration station where he remained with other detainees, German and Japanese, for 3 months.

Max Ebel was interned from September 1942 until June 1944. The reason for his internment was never explained to him. 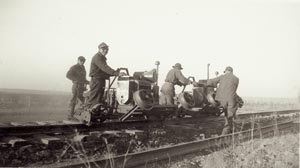 Between these years, Max was sent to five different internment facilities in the US; the last, Ft. Lincoln, in Bismarck, North Dakota housed some 1,000 men.  It was from Ft. Lincoln that Max, along with over 100 other internees, went to work replacing rails for the Northern Pacific Railroad.  During this time, the men lived in boxcars, 6-8 men/car, heated by a coal stove. Water was held in a tank car at the rear of the train. There were no bathroom facilities. They lived in these cars throughout the winter.

His daughter, Karen Ebel, has worked tirelessly to bring her father’s and other German-American World War II Internee’s stories to light.

Unlike Japanese Americans who were interned during the war, the plight of German-American internees has never been acknowledged.

Photos: From the Ebel Family Collection

Center photo: Max on spike puller, center, back to camera with floppy hat

Much of the copy for this post was taken from Max Ebel, a German Immigrant’s Story, German-American Internee Coalition website.

Doug’s story has been integrated into high school classroom American History units via our Learning Lab project (see: link above to Learning Lab page) where his first-hand narrative about his Vietnam experience helps students gain a greater understanding of the war and its human toll.

From the Poetry Foundation …  Poet Doug Anderson grew up in Memphis, Tennessee. He served as a combat medic in the Vietnam War, and after Vietnam attended the University of Arizona, where he studied acting. He started writing poetry after he moved to Northampton, Massachusetts, and worked with the poet Jack Gilbert.

Anderson has written about his experiences in the Vietnam War in both poetry and nonfiction. He is the author of the poetry collections The Moon Reflected Fire (1994), the winner of the Kate Tufts Discovery Award, Blues for Unemployed Secret Police (2000), and Horse Medicine (2015). In 2000 he published his memoir, Keep Your Head Down: Vietnam, the Sixties, and a Journey of Self-Discovery.

His awards include a grant from the Eric Mathieu King Fund of the Academy of American Poets, a National Endowment for the Arts Fellowship, and a Pushcart Prize. Anderson has taught at the University of Connecticut, Eastern Connecticut State University, and the William Joiner Center for the Study of War and Its Social Consequences at the University of Massachusetts, Boston.

To listen to Doug’s recording, click on the links below.

02 Doug Anderson_Day One as a Combat Medic

03 Doug Anderson_Realizing Something was ‘Not Quite Right’

Nineteen Pakistani teachers are spending a month at Plymouth State University learning about innovations in American education and how to translate them for use in schools at home.

In Pakistan, the teachers are divided by geography, ethnicity, and professional hierarchies – not to mention 17 languages – making it unlikely they would ever meet or work together. But on this small college campus, they are colleagues and friends.

Authorized by the Fulbright-Hayes Act, funded through the U.S. Department of State, Bureau of Educational and Cultural Affairs, and hosted by Plymouth State University, it is very much a dual Pakistan-U.S. program.  It encompasses an ever-expanding community of practice – and spirit – that transcends boundaries, demonstrating the power of citizen diplomacy in  a very complex world.

During the Project’s one-month intensive Institute and Study Tour Pakistani educators will use New England and Washington, D.C., as diverse learning labs. In the process they explore dynamic initiatives and institutions from rural New Hampshire to urban Boston and points south. They also share their own powerful work with underprivileged students: the faces and future of Pakistan’s vibrant civil society.

There is also an American reciprocal program that brings together U.S. and Pakistani educators in Pakistan or an alternate geographic site.

According to Blakeman Allen, director of the program, “This is very much a real time, tightly connected Project, with alumni living and working in Pakistan’s most vulnerable and marginalized areas.”

At the end of last year’s institute, the delegation shared their hopes and dreams:  “peace and freedom from fear.”

Audio is currently in production.

Michael Heaney dug below the weeds on a remote Vietnamese hillside and slipped a small military lapel pin into the earth. Then the former Army officer prayed.

“This is for Terry … and for the other nine guys who stayed here that day and who never came home,” he said.

Then considering the Vietnamese men who had led him to the secluded spot, halfway around the world from his Hartland home, Heaney added: “And also for the young Vietnamese boys who died that day, I pray to God, the father of all of us. We are all your children. We are together now, in love and in peace. None of us will ever fight again.”

Heaney, a former platoon leader who 46 years ago saw all 10 of the men under his command gunned down in an ambush by North Vietnamese soldiers, had returned to the land he calls “my valley of death” to reclaim a piece of his soul.

As he traveled to the ambush site with a translator, a Communist party minder and several North Vietnamese veterans, Heaney wrote in his trip journal, “I was in God’s movie, and wondered what the script would have in mind for me.”

The Hartland man, a father of five and a retired lawyer and college history professor, had traveled to Vietnam’s Central Highlands to exorcise a lifetime of sadness and guilt, embarking on a journey he had planned almost since arriving stateside as a badly wounded 23-year-old Army first lieutenant.

Despite the successful professional career and rich family life he built after his tour in Vietnam, Heaney spent countless hours trying to come to terms with the fact that he – unlike many of his Army buddies – had survived Operation Crazy Horse, a firefight so fierce it has been chronicled in military history books.

Heaney’s journey to the hills near the village of Vinh Thanh was his reason for returning to Southeast Asia. But the expedition also taught him more about the battle that ended his Vietnam tour, about war and about the enemy soldiers who killed his men in May 1966.

In addition, the trip bolstered his conviction that there are very few wars worth fighting. “The long-term effect on soldiers and their families is never a factor that’s sufficiently weighed when we’re deciding whether to go to war. It’s ‘Are we going to win? How long will it take? How many casualties?’ ” he reflected upon returning to his Vermont home.

“That’s almost the easy part. The hard part is what about the long-term consequences? Every time you fight a war, you’re consigning a large number of people and their loved ones … to pretty dire consequences – forever.”

Michael Heaney outside his home in Hartland, Vermont.   Heaney, a former Army officer who was the only member of his unit to survive an ambush by North Vietnamese soldiers in May 1966, returned to Vietnam to visit the site.

To Listen to Mike’s story, click on the links below: